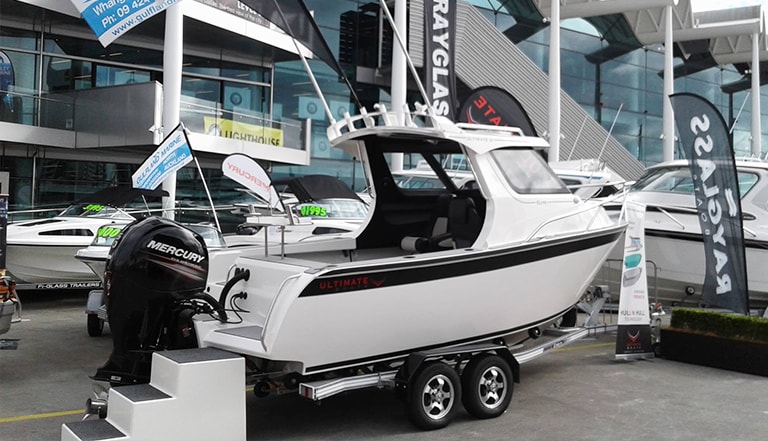 The Auckland On Water Boat Show was held on the 29th of September through until the 2nd of October and Ultimate Boats was proudly displayed on the stand of one of New Zealand’s largest and most reputable Mercury dealers, Gulfland Marine.

Displayed amongst such marques as Rayglass and Stabicraft. The Innovative Ultimate 21 Elite is a 'world first' design and created plenty of interest again and several deals are being worked through as a result of the show.

The build quality of the Ultimate 21 Elite spurred on demand for further models and sizes and has seen huge interest in bigger versions of Ultimate Boats. An Ultimate 26 is currently going through conceptual analysis now due to that demand, with a client that has exacting standards. The ability to have a hands-on involvement, and input into the design are factors that make Ultimate Boats Unique. Customers loved the clean lines and exceptional build quality, and comparisons were made to some of New Zealand’s top GRP boats, people saying it was like an Aluminium version of a Tristram or Rayglass.

CALL US EMAIL US
Email sales@ultimateboats.co.nz or call 021 138 0870 to arrange your Ultimate21 demo today
REGISTER YOUR INTEREST NOW! - Sign up for the latest Ultimate Boats updates